Part of the enterprise in the process of using automatic metal detection machine(as known as metal detector), to exclude from production line down suspicious products, often will again through the automatic metal detection machine channel, if this time no longer be instrument removed, so that it is qualified, and its release into the next procedure, in fact this way is not scientific.This article addresses one of the most common misconceptions: the correct way to identify suspicious items. 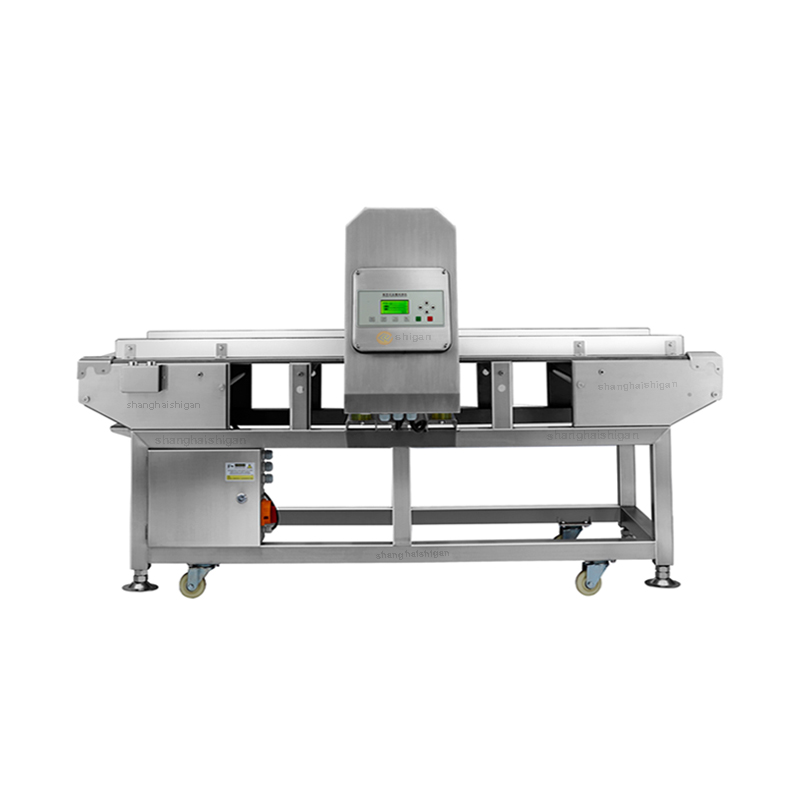 Generally speaking,automatic metal detection machine has two sets of coils, known as the vibration source;The following consists of two opposing coils, called vibration sources.The upper coil is energized to generate A magnetic field, and the lower two coils receive induced current Ia and IB. As the winding of the coil is opposite, the current of A and B is normally superimposed as (ia+ IB) =0.If the object passes through, the induced current changes, resulting in an unbalanced current, ia= IB =delta I, which then passes through the circuit to form a signal output.However, there are some differences in the mechanism by which different products pass through the detection channel: magnetic metal take iron as an example, it is magnetic, unbalanced by magnetic field, unbalanced by current generated by coil A and B, delta I generates signal output through signal amplification circuit, and the response is iron signal;Nonmagnetic Take SUS304 for example, when passing through a magnetic field, metal is not affected by magnetic field lines, but produces eddy currents.It will also cause the current imbalance, delta I through the signal amplification circuit to produce the signal output, in response to SUS304 signal.

Semiconductor, such as salt water, pure water, etc., has a certain electrical vortex (lead), will affect the change of the magnetic field, for example, some frozen food at the time of bad cold will have more water, the change of the induced current is caused by a magnetic field, interfere with the normal metal detection, products containing automatic metal detection rate is reduced, can cause SUS304 signal error.And some special water, salt, thickness, the increase in the density of magnetic lines of force through, resulting in magnetic field imbalance, will mistakenly send iron signal.Therefore, when detecting products through food metal detector, there are two situations: one is that the products contain metal foreign bodies; the other is caused by the interference of the components of the products themselves.If the product containing impurities passes through the metal detection machine with the original sample again and is judged to be normal release without blocking, it can be mixed into the normal product.

After the product is removed by the automatic metal detection machine, the suspicious product should be taken out, and then repeated twice according to the original direction through the detection head. If it can pass smoothly, it can be confirmed as qualified and flow into the normal product.If there is at least one unqualified product in the repetition process, it can be judged as unqualified product directly.

Shanghai Shigan is a professional automatic metal detection machine manufatures.Please contact me If have any question about machine importing, I'll be require your particular project.