As a metal detection machine (also called metal detector)used for detection of food raw materials, additives, food, pill, candy, aquatic products, dried vegetables, frozen food, shoes, toys, plastics, metal foreign bodies, chemical and other industries.Shanghai Shigan Industrail Co,.Ltd metal detection machine is the core component of the structure of products in the shape of the upper machine testing header, detection in the first three coil inside, typically use a casting molding, to ensure that the coil and the overall, reliable and is not affected by the interference of external factors, such as mechanical vibration, etc.), good stability, has high precision, stable performance, strong anti-interference ability, etc. 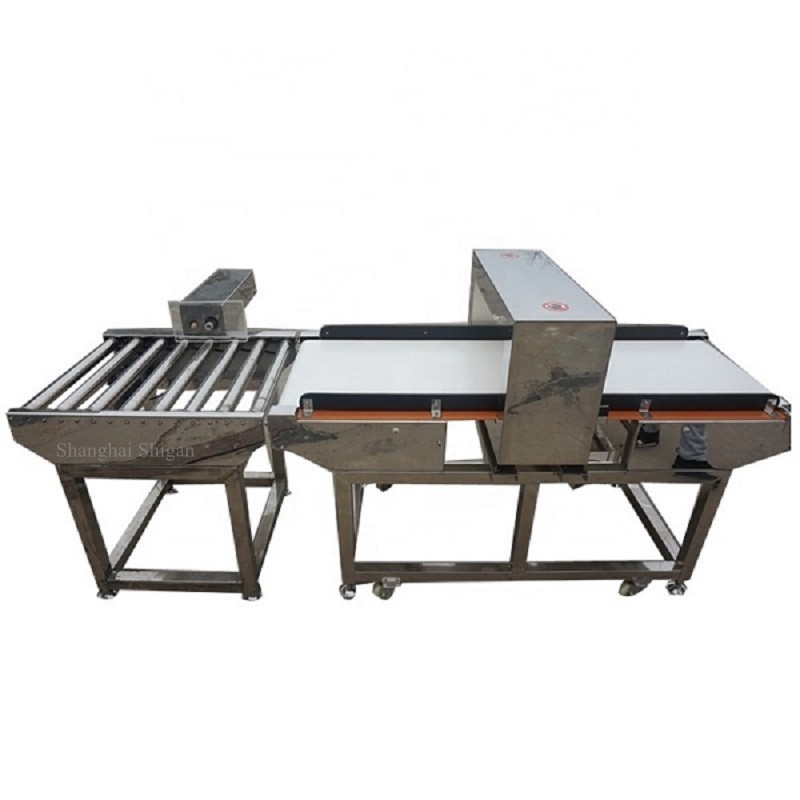 Now that we know how eddy currents and magnetic fields are generated, let's talk about the coils of a metal detector.Contains three coil detection head, three into a symmetric relationship, in the middle of the coil (launch) through the high frequency oscillator to launch high frequency electromagnetic field, on both sides of the (receive coil) used to receive the electromagnetic wave signals, when the outside world without metal objects close to the electromagnetic field, because of the way through reverse polarity connection on both sides of the coil, no induction voltage output.At this point if there is a metal impurity entering the magnetic field influence area, two receiving coil can appear signal cannot be offset, output induction difference is not zero, the induced voltage flows through filtering, demodulation circuit, system real-time acquisition the numerical value and to the high speed DSP calculation analysis, concluded that detect the presence of metal, controlled by the controller to realize the alarm, and automatically remove metal material.All metal foreign body detection model of the working principle of the coil, but for the aluminium film packaging testing machine, metal coil structure, winding and your work style is different, the upper and the lower side of the aluminium film packaging testing machine part is composed of many a coil, according to the size of the probe head, ranging from a dozen to a few dozen, and each coil is composed of many uniform copper wire winding on a coil skeleton, and installed on each coil skeleton powerful magnet, when the outside world has a ferromagnetic metal near the detection head, can appear cutting lines, by the electromagnetic field theory, we know that cutting the magnetic field will be induced in the coil winding current,The strength of the current reflects the size of the metal. The current signal flows through the current detector on the circuit board of the metal detection machine system, and the change of the current is detected and compared with the memory value. Once the value exceeds the current value, it will be judged as metal impurities, so as to complete the detection of metal substances.여전히 질문이 있거나 더 많은 정보를 알고 싶다면 저희에게 연락하십시오 !
관련 상품
생산 라인 용 금속 탐지기 고감도 금속 탐지기                                                        금속 탐지기가있는 디지털 체크 계량기 맞춤형 금속 탐지기
Chat with us